Showing posts from March, 2019
Show all

March is here! Daffodils are about to bloom! Signs that Spring is in toe! Don't you love Spring, the feeling that the renewal of everything is coming? Our students have been "springing" to progress ever more with each passing day! They were extremely excited to have done special coding projects such as coding a Leprechaun for St. Paddy's day! Our Robotics team is showing much progress as well. Under the instructor's leadership, the team has been doing lessons such as how to build a claw for the robot, the different rotations of the arm and how to write code in Modkit for the robot to perform certain tasks. It is extremely gratifying to see these young kids learn and progress at such fast pace. They come in knowing nothing about programming to in a few months, designing their own game and learning concepts such as a "forever loop", and "variables". Let's enjoy the upcoming nice weather and try to forget the rough winter for a w
Post a Comment
Read more 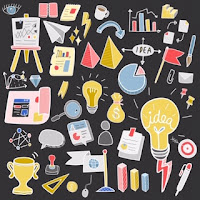 ‘Doing things that matter’- that’s what Seth Goddin tries to impress on all of us. Nowadays, all the buzz is about ingenuity and creativity. Every time we read or listen to the news, we hear about a new product or a new technology in the market, solving a problem in our society using technology and innovation, designing solutions to make our lives better. Not only it’s important to come up with new ideas, but also to do so at the right time. Victor Hugo  stated it best: “Nothing is more powerful than an idea whose time has come.” The first computer was arguably first invented i n 1822 by Charles Babbage. He conceptualized and began developing the Difference Engine, considered to be the first automatic computing engine that was capable of computing several sets of numbers and making hard copies of the results.   However, a personal computer became mainstream and affordable for the common folk in the  1970s  due to the mass production of the microprocessor starting in 1971.
Post a Comment
Read more
More posts